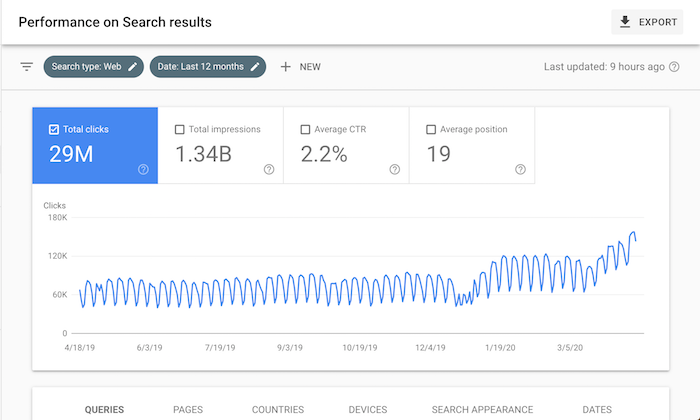 The screenshot above is my Google traffic over the last 12
months.

As you can see, my traffic is growing. And there are many reasons for that, but there is one trend that’s really caused the majority of my SEO growth.

You might be thinking it is Ubersuggest because it makes up 22.4% of my traffic now. But Ubersuggest has been integrated into NeilPatel.com for years, so that’s not it.

So, what do you think it is?

Well, I’ll give you a hint…

My traffic per region

Let’s look at my SEO traffic in a few different regions.

Here’s my traffic in the United States over the last 12
months:

Now here’s my traffic in the United Kingdom:

And here are the stats for Canada:

You can see that they have all increased, but not enough to
cause the big spikes.

Now let’s look at some of the international markets we have been focusing on over the last few years.

And here is the first international market we expanded to,
Brazil.

As you can see, the international markets are growing at a much faster pace, especially Brazil. But that is because we have been focusing on our SEO in Brazil more than any other country (outside of our main English markets).

Why you may ask?

Because a Google employee told me to

The most vital SEO lesson I learned came from a friend at Google, but they didn’t tell me anything that was really a secret…

They told me that the majority of the searches on the web aren’t done in English, they are done in other languages.

And in the English markets, everyone is competing, which
means tons of sites and content from Google to choose from when it comes to determining
which site should rank number 1 for any given keyword.

But the international markets are the opposite. There is a lot of demand but not enough sites for Google to choose from when it comes to rankings.

So even though there are tons of algorithm
updates and SEO is becoming more difficult, it isn’t always the case with
many international markets.

And the graphs above show it. As you can see, I’m getting huge traffic growth in those regions.

So, what should you do? Especially if you are starting
off and don’t have a big budget or any budget for that matter…

Wherever you see big corporations like Amazon investing, it
means there is money to be made in those regions.

It’s safe to say over the years Amazon will pour in well over $10 billion into India.

That’s a big bet for someone to make. And you can assume it’s a calculated bet because they think there is much more money to be made.

And it’s not just India…

Amazon is investing $236 million into Brazil to boost up their cloud infrastructure. And they’ve invested over $2.26 billion dollars in France. They are pretty much going after the whole world.

As you can see from the graph, Germany is its second-biggest market and Japan is also up there. But what’s interesting is the green bar as that represents the “rest of the world” and that green bar has been growing at a fast pace.

Now, I get that none of us are Amazon and we don’t have huge
budgets, so I wanted to take a minute and break down how you can do this on a
global scale without breaking the bank.

International SEO on a budget

When I first started to expand internationally, my business
was much smaller and we didn’t have much money, if any, to spend on
international SEO.

Yes, I am an SEO, so you would think that it makes it easier, but not really because the only language I am fluent in is English.

And if you fast forward to today, I’m still only fluent in
English, but we have 7 offices around the world.

And we did it without laying out any of our own money. Yes, it did take time and it will for you too, but that’s the only way to do it when you are starting off and are small.

So how did we expand internationally without spending upfront?

We partnered with locals.

Why not find people in these regions who speak English as well as the local language of the country you are trying to expand to?

There are so many people without jobs, you’ll be shocked by how many people will be open to a partnership. All you have to do is look at Facebook groups and forums to find people in your space who live overseas.

Here’s how I structure each partnership:

Now that we’ve covered structuring your international SEO expansion, let’s go over how you do it.

I’ve written a handful of blog posts that break down the
steps on growing your traffic in new languages and countries, but before I
share them, I wanted to break down the 2 biggest lessons I learned:

Here are some resources that will show you how to do
international SEO:

Funny enough, one of the reasons I created Ubersuggest was
to build a tool that would help my team and I expand internationally.

Here’s a feature in Ubersuggest that will help you, that
most people don’t know about.

So head over to Ubersuggest
and type in a competitor that you know is big and has a global presence.

I want you to click on the “Top Pages” navigational option
in the sidebar.

This shows you all of the top pages that your competitors
have.

But don’t focus on those results. I want you to look at the regions that make up some of your competitions’ traffic… you’ll see that number next to each flag.

Click on one of the regions that you are considering
expanding into. You’ll now see the results adjusted.

As you can see from the screenshot above, those are all of the pages on my site that are really popular in Brazil.

Now, I want you to click on “view all” under “Est. Visits”
as that will show you all of the keywords that drive traffic to that page.

This will provide you with a laundry list of international keywords that you can give to your team so they can start creating content to go after them.

I also want you to click on “view all” under “Backlinks” as
this will show you who links to your competition. You can then create a list of
sites to reach out to so you can get them to link to you.

That’s the simple strategy we used to hit it hard in regions like Brazil and what we are also doing in countries like India, Spain, Mexico, France, Germany, and countless other countries.

English is a great language. And I love the United States as
well as other English-speaking countries.

But that’s not where the opportunity is. There is more opportunity in global markets, which is why you need to follow the trend of international SEO.

Even if some of these countries don’t have as high of a GDP compared to the United States, it’s fine. Remember there aren’t as many competitors, which means you will have a lot of opportunities to still do really well.

So what region are you going to expand to first?